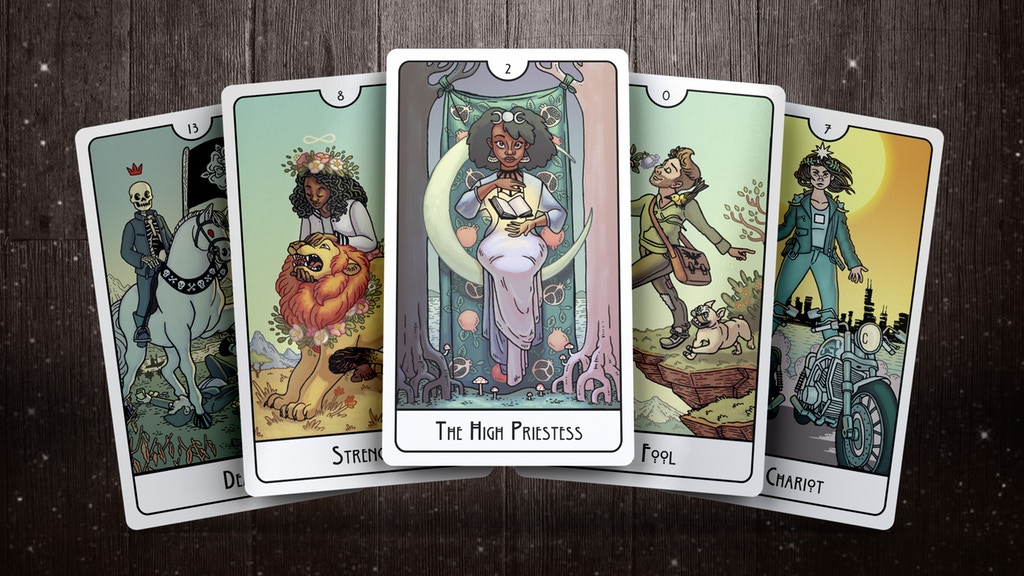 You can now order This Might Hurt Tarot decks, pins, and cloths at IsabellaRotman.com/store .

Latest Updates from Our Project:

What a whirlwind the past few months have been! I'm delighted to report that the first edition of This Might Hurt Tarot has SOLD OUT. I still can't quite believe how quickly 2000 decks went. That's 772 Kickstarter decks, 363 deck preorders, and about 865 decks sold out within 2 1/2 months of the deck being released!

The Second Print Run is On Its Way!

The good news is, the second print run has already been printed, and will be released in March! It's currently on it's way from Shenzhen, China to Chicago Illinois. Preorders are available here. The second print run is almost the same as the first, with just a few changes.

For the second print run, the gilded gold edges are being replaced with holographic pearl edges! I am absolutely in love with these pearl rainbow edges, and I think they are a wonderful compliment to the holographic black edges. Both pearl and black edges will be available in the second print run. The gilded gold will no longer be available, so those of you who chose gold edges on the first edition have something rare and special!

Every offset print run varies slightly in how the colors print, and in this edition, the colors are brighter and more saturated!

A Few Other Small Changes

I hope folks enjoy the second edition as much as they have been enjoying the first! Preorders are available here. Thank you all, again, SO MUCH, for making this all happen!

Fun Fact: Did you know a first edition and first printing are not the same thing? An edition is when a significant change is made - like a new cover image or adding an introduction. Multiple print runs can make up the first edition. This reprint counts as a second print run, but not a second edition, because the changes are small. Here is a helpful article from First Second if you want to know more!

HURRAY!!! ALL REWARDS AND PREORDERS HAVE NOW BEEN SHIPPED!

If your deck arrives with any misprints or defects, please let me know by emailing photos of the issue to IsabellaRotman@gmail.com. I am happy to replace any misprints reported to me with photo documentation within 14 days of being marked delivered by USPS via tracking.

The preorder store hosted through backerkit is now officially closed. If you wish to order another deck, a cloth, or anything else I make those will now be hosted in my online store. Yay!

A HUGE THANK YOU to the folks who helped me ship this giant pile of decks! I can't extend my gratitude enough to Kayla, Laura, Darick, and Essie!

For anyone who needs a refresher, here is the shipping policy as posted on my Kickstarter campaign page: Priority Mail includes limited insurance, so if your reward arrives damaged or doesn't show up within 15 business days for domestic orders or 4 weeks for international orders, from the day it was shipped, I will file an insurance claim with the postal service and replace your lost or damaged item. Additional insurance will be purchased for rewards at higher levels

Here is a video of a This Might Hurt Tarot box being opened! I suggest opening the shrink wrap with a blade or a fingernail, but be careful not to knick the box when you do. The box itself is a magnetic closure that opens from the side.

I wanted to take a moment to clarify a few points on shipping, since some folks have been asking questions:

For anyone who needs a refresher, here is the shipping policy as posted on my Kickstarter campaign page: Priority Mail includes limited insurance, so if your reward arrives damaged or doesn't show up within 15 business days for domestic orders or 4 weeks for international orders, from the day it was shipped, I will file an insurance claim with the postal service and replace your lost or damaged item. Additional insurance will be purchased for rewards at higher levels

The official release party for This Might Hurt Tarot was Friday night, and it was a blast! Thank you so much to everyone who attended and supported. Lots of folks showed up to celebrate, and it was absolutely the perfect way to send this deck off into the world!

Extra thanks to our amazing tarot readers River Roberts, Elizabeth, Wren, and laura, our generous volunteers Essie, Sacha, Jess, Darick and Selena, and of course Catherine at Ars Memoria for letting us use her wonderful space!

For those of you who couldn't make it to the party, I have a consolation prize for you! For months my good friend Laura Apotheosis and I have been working on a playlist for the party with a song or every tarot card! It's public on Spotify so feel free to enjoy it here. You can access the list of which song corresponds to each card as a google doc here.

A Song for Every Tarot Card

The High Priestess: Season of the Witch - Lana Del Rey

The Empress: Greens - Be Steadwell

The Hierophant: Take Me To Church - Hozier

The Hermit: Me, Myself & I - Bebe Rexha and G-Eazy

Justice: He Had it Coming - Gordon Lorenz Orchestra

Temperance: Moderation - Florence and the machine

The Sun: Walking on Sunshine - Katrina & The Waves

Judgement: Once in a Lifetime - The Talking Heads

The World: And She Was - The Talking Heads

Six of Wands - We Are the Champions - Queen

Seven of Wands: The Greatest - Sia

Nine of Wands: This Year - The Mountain Goats

Ten of Wands: Carry That Weight - The Beatles

Knight of Wands: What’s Up Danger - Blackway and Black Caviar

Ace of Cups: Someone New - Hozier

Three of Cups: If She Wants Me - Belle and Sebastian

Four of Cups: In My Dreams - Kali Uchis

Five of Cups: Crying at the Wawa - Mal Blum

Six of Cups: We’re Going to Be Friends - White Stripes

Ten of Cups: This Must Be The Place - Talking Heads

Page of Cups: Too Much - Carly Rae Jepson

Knight of Cups: Give Me a Try - Wombats

King of Cups: Let's Dance to Joy Division - The Wombats

Two of Swords: Should I Stay Or Should I Go - The Clash

Three of Swords: I'm Not Calling You a Liar - Florence and the Machine

Four of Swords: I Wanna Be Sedated - The Ramones

Six of Swords: Color in Your Cheeks - Ibibo Sound Machine

Seven of Swords: Bad Reputation - Joan Jett and the Blackhearts

Eight of Swords: Self Esteem - The Offspring

Nine of Swords: Where is My Mind -  The Pixies

Knight of Swords: A Rush and a Push and the Land is Ours - The Smiths

Five of Pentacles: When the Chips Are Down - Anais Mitchell

Page of Pentacles: When I Grow Up - Fever Ray

Of course not every song is absolutely perfect for it's card. Did you know most songs are about romance and most tarot cards are not?? ANYWAY, I hope some other folks are inspired by this to make their own tarot playlists, because let me tell you, it was a fun challenge!

Now that the deck is officially released, and all addresses are locked through Backerkit, I will be starting fulfillment! I have over 900 packages to send out, so the process will probably take about two weeks! Please be patient with me as I work through sending out all these packages. When your reward goes out, you will receive a tracking number. I'm so excited for you all to receive your cards! If you post them online once they arrive, please remember to hashtag #thismighthurttarot so I can see!

All freaking 2,000 of them came on two palettes today and were loaded into the friendly neighborhood UPS store. Holy crap!

Decks will start shipping after Oct 18th! Addresses will be locked Wednesday morning CST.  You should have received a "final notice e-mail" via backerkit this morning instructing you how to update your address if you need to do so. You have 48 hours from the time that e-mail was sent to check your address, make sure it is correct, and update if necessary.

Kickstarter rewards will begin to ship after the official release party October 18th! Attending the party to pick up your deck in person is still the earliest way to get your deck. For those who are receiving your decks in the mail, please be patient. It may take up to two weeks for your deck to be shipped, as I have about 900 packages to work through.